Relics of the Great Eastern

Despite being quite literally the world's largest man made moving object, the SS Great Eastern was not hailed as being quite the triumph she was intended as. Rather than becoming a symbol fitting of the empire, she became a carbuncle. Excepting the successful telegraph laying career, the ship was built with little idea of demand - and resulted in very little financial success.

Besides her famous stint as a tourist attraction and department store advertisement in Liverpool - where she became a floating bar and restaurant - the SS Great Eastern was already largely forgotten by the time of her destruction.

In 1888, no longer fit for purpose, and no longer with a viable future, the enormous vessel was broken up via wrecking ball - no small job, and one of the earliest times a ship had been scrapped in such a method.

So, what's left of the SS Great Eastern?

The short answer is not much; the physical presence of the ship is still discoverable at the location of her destruction, a funnel and whistle sits at the SS Great Britain museum in Bristol, and the Anfield Stadium in Liverpool has been using her top mast as a flagpole since 1888. A trip to Millwall in London will present what's left of her launch ramps.

Occasionally things such as bolts and rivets will turn up on auction sites - but the Victorians were savage in their lack of preservation and conservation, and gave little thought to the idea of preserving such an enormous white elephant.

However, much of the Great Eastern's life and times can be reflected via antiques and relics from her career - and the author has collected many pieces while writing The Great London Conspiracy.

Original share certificate for £20 in The Eastern Steam Navigation Company, 1851 - from the author's personal collection.

This 1851 Share Certificate is about as early as one can get in the Great Eastern’s history – at least, without diving into Brunel's own diagrams. The newly created company was originally banking on a mail subsidy – with the hope it would facilitate a fast service to the East, where a burgeoning trade and emigration route lay. The mail subsidy was not awarded – and the company had no reason left to exist.

Brunel and John Scott Russell built the company’s two steamships – SS Victoria and SS Adelaide – but, lacking their subsidy, these two vessels purely became charter ships for their somewhat disorientated company. Brunel then approached them in 1852 with an appealing concept – a vessel capable of travelling east without having to fill its bunkers, capable of carrying thousands on their emigration. As it would have none-stop passage, it was able to match the faster clippers.

The company was enthusiastic... mostly. One investor left the boardroom in disgust, and many voiced scepticism that a ship of such size could survive the journey. John Scott Russell won the tender, and construction began in 1854...

This piece is a fascimile of the Ducimus Great Eastern Steam Ship pamphlet, which was sold to people visiting the shipyard and exploring the fledging vessel - at the time, a good source of income for her struggling owners. Note the celebration of John Scott Russell. Perhaps deservedly, his reputation is now far less positive. It's uncertain as to where the greater details in his double dealing became clear - but the people of 1850's London clearly had nothing short of glowing reports for the man!

By 1858, the Eastern Steam Navigation Company was in dire straits, and was forced into the creation of a second - the Great Ship Company - to avoid complete bankruptcy. This new company purchased the ship for a paltry £160,000 and continued work fitting out.

This contract went to Russell once again. Mostly likely as Brunel hadn't been present to have a word in the matter.

A share in the second company to own the SS Great Eastern - the Great Ship Company Limited, in 1858. From the author's collection.

In 1859, finally complete, the ship commenced her maiden voyage, while Brunel was laid up in his bed, slowly passing away. Her first voyage to Weymouth, then across the Atlantic, was disastrous - with a feedheater explosion causing five deaths aboard her off the coast of Hastings.

Our next pieces are from 1860 - after the death of her designer, the bankruptcy of her first company, five stokers on her maiden voyage and several shipyard workers. The SS Great Eastern was now trying to make back her company's plummeting finances - and, out of desperation, they put her on the popular Transatlantic route.

It wasn't a well advised decision. She was slower, more expensive and less efficient compared to the small, fast and cheap clippers that ran across the route.

The first voyage garnered a hundredth of her passenger capacity and she never carried much more. The company tried to make up the coffers with souvenirs, books and coins - souvenirs for those seeking the vanity of the world's largest steamship - and the slowest, most inefficient transatlantic vessel...

A souvenir Cowrie Shell, sold on board the ship

Hand carved shells were a popular gift aboard ships during the Victorian era, and relatively inexpensive for their companies. Often, artisans would board, carve their wares and sell the result on a pop-up stall in New York.

Of course, with less than a hundredth of her capacity for passengers aboard, it's likely many of them went unsold and/or destroyed - making this particular item a rare and unusual survivor.

Coins have been a popular souvenir for every large Victorian project. The SS Great Britain, the Thames Tunnel, the Clifton Suspension Bridge - many Brunel related projects were celebrated with medallions, tokens and coins - often made of pewter or silver.

1860 Souvenir coin. The grand expectations for the ship are clear - sadly, this battered old coin has lost much of its clarity. It must have been rather beautiful when it was new!
The rear of the coin, besides being dated, shares similar text to the Cowrie shell, with the sheer scale of the ship being the major selling point. The dog tag and loop is a recent addition but I've no idea when it was done. A big shame!

By 1864, the SS Great Eastern was no longer financially viable, and was sold for a miniscule sum to Daniel Gooch, Thomas Brassey and John Pender. These gentlemen set up the Great Eastern Steamship Company, and immediately chartered her as a cable layer for the Telegraph Construction and Maintenance Company in the United States.

She began work laying the new Transatlantic Cable. Which takes us to our next piece in the collection!

Laid after the disastrous failure of the 1855 Telegraph cable, this piece was laid by the SS Great Eastern. It was troublesome stuff - note how even on my piece the pitch-rope armouring is flawed! Over 2,200 miles of this cable was laid between Valentia Harbour and Newfoundland. The first attempt at this makes up The Great London Conspiracy's climax.

The Great Eastern had a nearly ten year long successful telegraph career; but technology continued moving at an ever-increasing pace, and she was superseded by smaller, more agile vessels.

After changing hands and failed auctions, the ship was sold and moored in Liverpool - now owned by Lewis's department store, and her telegraph cable tanks converted into bars and music halls.

If you ever need proof of the Victorian's strength in capitalism, it's surely here. A department store, not dissimilar to the Debenhams et al of the modern day, purchased the world's largest ship and painted her with an advertisement!

They, too, sold souvenir coins and tokens based upon their largest, most eyecatching property on Liverpool's prime waterfront. The author has a few items relating to this period.

This battered coin, from 1886, was a metal detecting find. It's been through the elements but the Lewis's logo and Great Eastern design is very clear.
Lewis's Great Eastern Exhibition, Liverpool, 1886.

One of the more unusual pieces is a Souvenir pewter tankard - a particular favourite for visitors and likely very popular for the bar that was now based in the fore telegraph cable tank.

Of note is the inaccurate embossed design of the Great Eastern - with only three funnels instead of the four she sported at this period in her life.

These mugs are surprisingly difficult to get hold of. One can only presume they weren't enormous sellers. 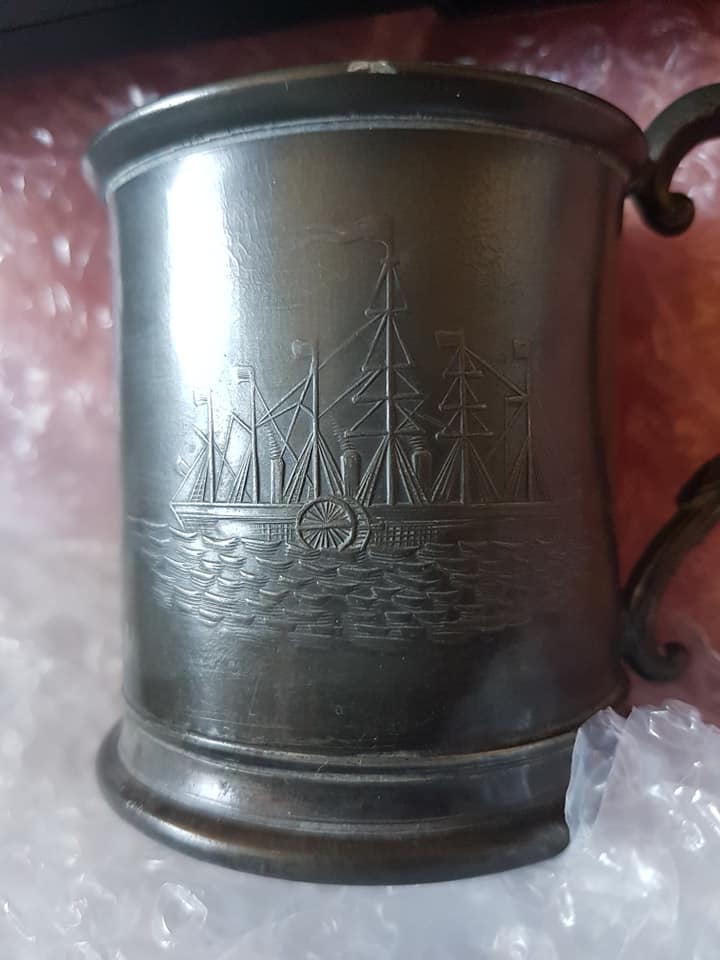 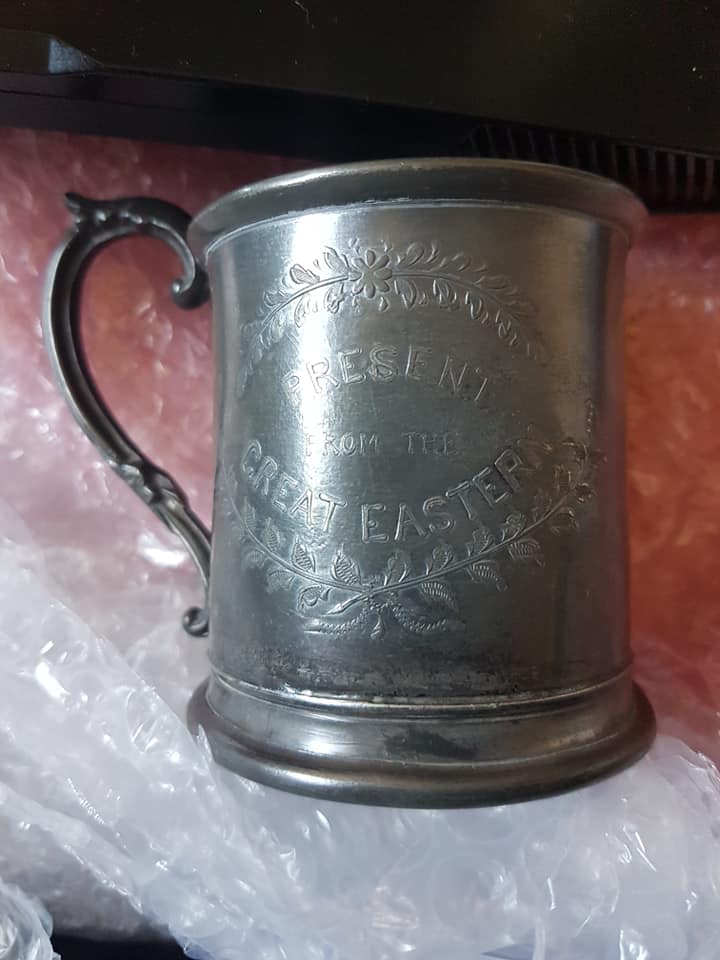 And, finally, possibly the last souvenir coin manufactured before she was taken off of exhibition.This slightly more detailed - and far better preserved - coin features the name A. Manard-Hubner - a man whom held many exhibitions in his time. 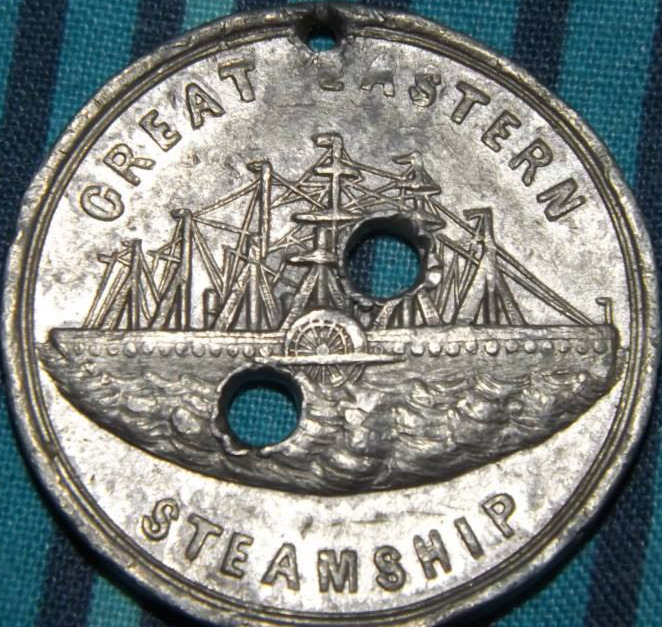 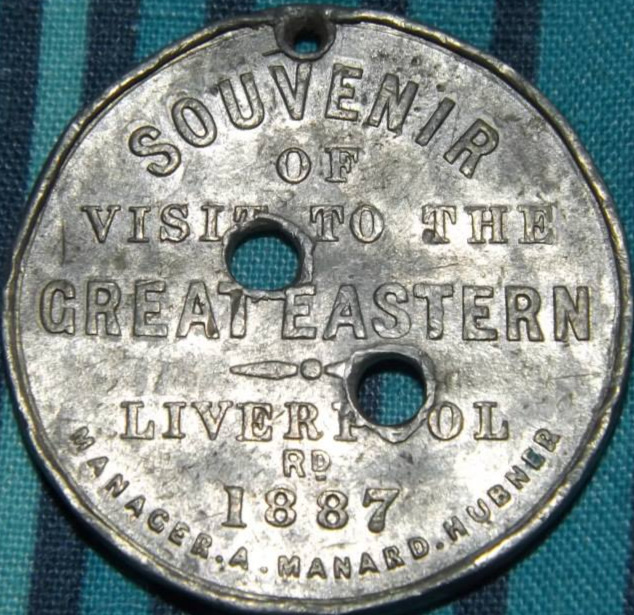 Note the two holes in the coin - used as button, or walking stick mount? Hard to say. This is one of the larger tokens in the author's collection.

Arthur Manard Hubner was a popular advertising contractor, based in Soho, London. He continued business for years after the Great Eastern's destruction.

From that, the giant that attracted so much attention met her final end; no longer viable as an attraction, music hall, fairground or vessel. She was life expired, rotting and rusting - and, sold for only £16,000 scrap value in 1888. It took 18 months before she had disappeared from Henry Bath's scrap moor on the River Mersey.

The Great Eastern is now practically a legendary failure - but the sheer scale, the sheer importance of her contribution to history and her fascinating life story has proven to be an incredible project - and made a wonderful subject for a story.

For those wondering - no, there weren't any corpses in her double hull.