Like many incidents in The Great London Conspiracy, the Tottenham Road Railway Accident is very much real - and was an unusually dramatic crash for the time that exposed many issues with the Victorian railway system and its attitude.

While travelling at 40mph, the 7:00AM Cambridge to Bishopsgate 'Fast' passed through Tottenham as it had for years; ever-prompt at 9:20AM.

This 2-2-2 Steam Locomotive was a standard of the era and produced for several companies across England and Europe, known almost ubiquitously as the Jenny - a name taken from the first in its class, Jenny Lind - itself named after a Swedish opera singer. These were your typical mid-tier Victorian mixed traffic locomotive, and rather attractive machines - well known for being reliable workhorses in most applications and a regular sight around London's many small railways.

The author found out what class of engine was involved after drawing the illustration - but the similar look does much to illustrate just how standard the engine's basic shape had become by this point in railway history! 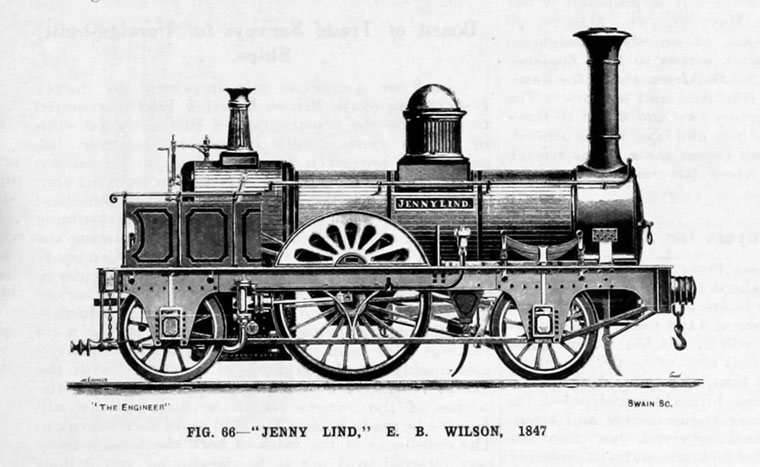 The Cambridge - London train followed a standard formation - the locomotive (including tender), one guard's van, eight carriages and a horsebox.

While running at a top speed of 40mph (most reports claim between 30-40mph, but by this part in the journey one would expect it to be going 'full') the engine suddenly sheared off one of the wheel tires - a ring of cast iron riveted to the locomotive wheel - and jumped upon it, forcing it off of the line and onto the ballast. The crew shut off steam - which only caused the train to smash into the locomotive's tender as she jarred into the ballast. The third carriage - 2nd class, and made of Mahongany - jarred off of the line, and acted as a counterweight. The entire splinting, ramming force of the train broke windows and swung the locomotive leftways onto the line side, where she met the platform ramp.

In a dramatic motion, she was vaulted upwards, fell to her side and then wheel-over-funnel, until she was laid on her back, facing back towards Cambridge. The train followed against her, with the tender breaking free and mounting the engine, then swinging to the right.

The guard's van lost its roof, collapsed and wrapped around the heap, while the leading first class carriage shattered to firewood. A second class carriage behind climbed aboard the platform and the rest of the train came to a standstill - windows broken and passengers heavily jarred. There's no record to my knowledge if there was a horse aboard the horsebox or its condition!

It must have been a spectacular visage to see a 23 ton locomotive vaulting like a toy on a ramp, and a gruesome scene underneath - as her crew remained steadfast trying to control her into a halt - and had, as a result, received the full impact of their locomotive on top of them.

The locomotive - reduced to a giant, hissing lump of scrap - was thoroughly inspected, and the broken piece of wheel tire held up against company standards. It was flawed in two places, one by the wheel tire's weld and the other in a strange fracture. Both were noticed to be almost indistinguishable, and had been turned, worked and inspected for hundreds of miles in the past.

The wheel tire had stretched, spread and bent off of the wheel surface - causing a minor imperfection, leading to a heavily fragile - and incredibly important - operating component. It isn't certain if they were the original tires for the locomotive, or had been fitted by the company since delivery. If the latter is the case, It had not been supplied by the locomotive manufacturers, and instead came from a cheaper machine shop - having being turned repeatedly over 10,696 miles with no major cause for concern - as the visual of the wheel saw no immediate fault.

It was on the weld that the tire broke - springing off suddenly rather than shattering, with substantial enough force to jar the engine onto the ballast. The crew shut off the steam, causing the carriages to then surge against it - and force the engine further into catastrophe.

The brake van did apply but was situated solely behind the tender - a typical layout at the time when an engine was turned and run on the opposite end from a terminus. This meant there was no braking for the actual weight of the train behind it - only, in practise, for the locomotive and her tender.

Without this braking ability at the rear, the train's momentum was simply out of control. The sole brake van - or break van, to use the earlier term, despite the attempts of the train's staff, had no ability to prevent or reduce the scale of the accident at hand. They followed their regulations to the letter.

This insufficient braking and poor guard van placement exacerbated the force of the train with a slight downhill gradient - resulting in a runaway with its head already derailed.

The fracture had occurred some 160 yards from the station platform - no enormous distance, and in practise almost impossible to stop a train within at 40mph. The train did not have a scheduled stop at Tottenham, so the service had no braking preparations underway and wouldn't be braking for the Bishopsgate Terminus for another five miles.

The result was a horrific scene, with an engine facing the opposite direction, balancing on top of its smokebox, with two souls underneath it and a massive of wreckage. The guard and his mate, by miracle, were thrown clear and escaped with only minor injuries, while five other souls were lost in the carriages.

The unusual violence of the incident and dramatic results would shake the industry, and led to a major investigation of the Board of Trade - sadly, with no major rectification.

In The Great London Conspiracy, the incident is fictionalised slightly - but only, in practise, to the cause and effect of the incident. William Jacomb was not on the train's passenger list in reality and there is no sign of society meddling.

The Tottenham Road Crash of 1860 was, instead, a result of the institutional failings of the railway system when faced with the opportunity of cost cutting, with a still young industry encountering numerous faults and issues.

The pioneering decades of the railways were a tumultuous, difficult time for companies, passengers and engineers - with the rapid growth of the system and ongoing railway mania, incidents from untrained staff and desperate companies were a way of life.

By 1862, the ECR was amalgamated with its rivals in East Anglia - resulting in a complete network of nearly 600 miles, and the first creation of the Great Eastern Railway.

There is no information regarding the locomotive following the incident.

Tottenham Road now operates as Tottenham Hale - though none of the 1840s railway station survives.